A few years back I bought a small PV Solar system. Only 3 230Wp panels and a Soladin 600 inverter. I installed the system myself on the shed using Ubbink Consoles. These consoles are really nice. They are lightweight, so easy to get to the roof and rock solid once weighed down with some 30x30cm concrete tiles. 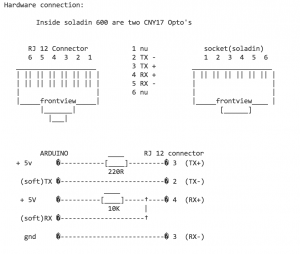 The Soladin 600 has a serial port available but it is in an RJ12 form package. Interfacing is super easy thanks to the Soladin Arduino library. Just add two resistors and the hardware side is sorted.

I had a JeeNode lying around and with the addition of an MX485 IC, the connection to the RS485 bus was also sorted. A few lines of code later and the PV data from the Soladin Inverter was transmitting on a 10-second interval on the RS485 bus.

This is quite an old project but I recently revisited the code when I made changed to my automation system.

It ain’t pretty but it has been working reliably for 4 years now.

Fortunately, you can’t see the mess when the box is closed.

The code is on my GitHub for the tweakers, hackers, and tinkerers. The interface also feeds real-time data to the status page.